skip to main | skip to sidebar

The ponies at Prestwick were full of fun today or was it just horseplay? 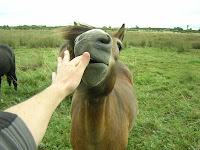 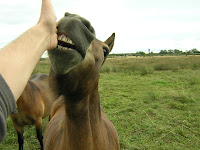 Posted by Flexigraze at 08:03 No comments:

The ponies at Prestwick are starting to have an impact opening some areas of the grassland. It's just a shame that the water levels have risen back up to near winter level with the rain we have had this month. Once they have dropped back again some of the rushes will be cut open it up some more. 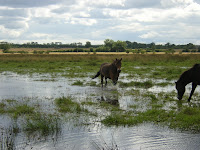 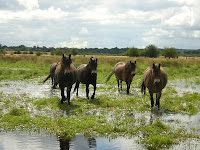 Posted by Flexigraze at 06:04 No comments:

They always get the better of you don't they.
The 4 cattle on Druridge pools have been quite happily settled there for several months now. There were 2 steers (castrated males) and 2 females one of which was a free martin. A free martin is the female from a pair of twins and is almost always infertile. The plan was to bring another 4 in to join them which would have been female, but before this could happen the one fertile female in the group decided she couldn't wait any longer and jumped 3 fences and travelled 2 fields to find a bull. Once there she quite happily stayed and was not keen on returning. After much discussion about the possibility / probability of this happening again it was decided that the best course of action would be to take the cattle off for now. This isn't ideal as the grass is still growing and should ideally be shorter for the migratory wildfowl which start to pass through at the end of this month but the probability of this happening again is far to high and if young cattle are bulled before they are big enough it results in difficult calvings and a strong chance that the mother and calf will not survive. We will have to rely on the ponies and possibility some sheep to keep the grass down for the rest of this summer.
Next year it will be all steers and not hormonal teenagers!!

Posted by Flexigraze at 08:03 No comments: